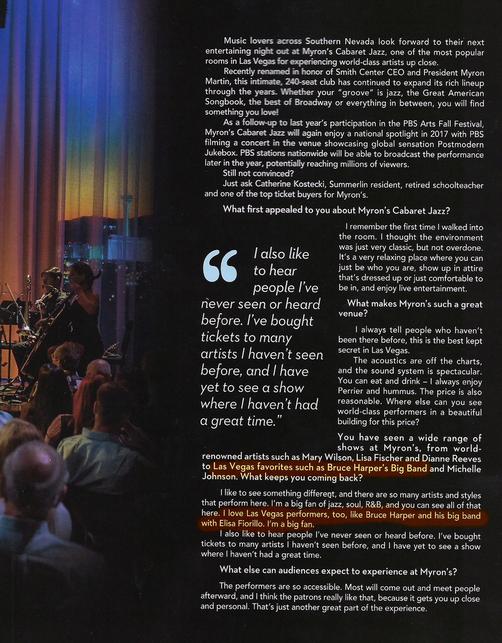 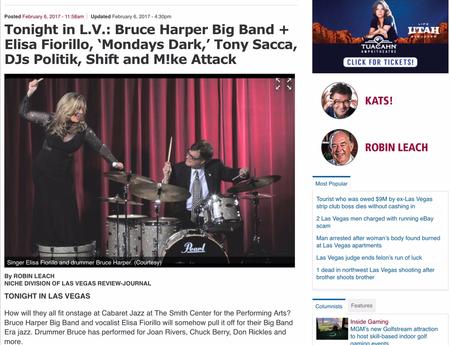 By JOHN M. GLIONNA
SPECIAL to the LAS VEGAS REVIEW-JOURNAL

With a few taps of the drummer’s sticks, the big band bursts into yet another stylish beat, controlled, yet crazy-cool, a blast of synchronized straight-ahead jazz. It’s a largely string-less sound, with saxophones, trombones and trumpets carrying most of the freight; these diverse musical dialects voice collectively with a showtime verve that suggests the days of Old Vegas elegance.

The selections are post World War II; later Duke Ellington or Ella Fitzgerald at the old Savoy ballroom. They evoke swirling dancers and cigarette girls, martinis poured by black-tied bartenders, and maybe Frank Sinatra waiting in the wings to take the microphone.

Bandleader Bruce Harper moves his 17 players — 16 men and a woman on piano — into a toe-tapping arrangement of “On Green Dolphin Street,” which became a jazz standard after it was recorded by Miles Davis in 1958.

The piece reaches its crescendo with a flourish of horns.

No bows, no applause.

Then the players murmur among themselves, cracking insider jokes like a clutch of rag-wearing veteran mechanics inspecting a greasy carburetor.

‘BECAUSE THEY LOVE THE MUSIC’

This place is no ballroom or recital space for adoring audiences. It’s a converted horse stable, a hideaway respite where musicians play only for themselves and each other.

Known as Hemming’s Hall, the rehearsal space is called the very soul of jazz in Las Vegas, one of the city’s best-kept musical secrets, where word of sessions passes quietly among players.

It’s a low-slung barn with bars on the windows located just south of the airport, a musical galaxy far from the Strip and its well-lit marquees. At night, carrying their instrument cases, the jazz players negotiate an eerie backyard walk that feels less like a path to an entertainment venue and more like a place where the bodies might be buried.

Five nights a week, and sometimes in the mornings and afternoons, musicians gather free of charge to woodshed and perfect their sound, to sight-read old standards and let the solo licks slide.

They come together to play all that jazz.

“The guys come,” says Harper, a veteran drummer with a slow Texas drawl, “because they love the music.”

Harper has the place on Tuesday nights to run his Bruce Harper Big Band through its paces, preparing for gigs that have included The Smith Center. On other nights, different musicians — amateurs and professionals alike — gather here in the soundproofed garage.

The Hall is the brainchild of Jim Hemming, a now-retired trombone player and bandleader who recognized that a generation of dedicated jazz musicians no longer had a place to play, practice and perfect their craft.

In 1989, when the Musician’s Union of Las Vegas finally closed the doors on its office-and-rehearsal-space complex near the Strip, the big band jazz scene moved underground, to tiny garages in the suburbs with beers dispensed from picnic coolers.

Hemming ran one such bootleg space that included a backyard stage with risers and a port-a-potty around the corner. Then, in 2008, he moved to an isolated ranch-style house on El Dorado Lane, where previous owners raised horses.

His wife, Doris, looked out into the backyard at an exposed slab of concrete that used to be the old stable.

She turned to her husband.

“Jim, you’ve got to build a practice place for the guys,” she said. “They’ve got nowhere else to go.”

Build it, she said, and they will come.

Harper recalls playing his drums at the old musician’s union hall on the corner of Tropicana and Duke Ellington Way. Local players would roll into full bar and rehearsal space for some practice and a few laughs between their paying gigs on the Strip.

“All the musicians hung out there,” he said. “And people like Count Basie and Sarah Vaughan would stop by and listen when they came to Vegas to play.”

Frank Leone, a former president of the musician’s union, said headliners in the casino ballrooms staggered their shows between 10 p.m. and 2 a.m., which meant that back-up big band players might show up at the union bar to test their chops before a gig or slide in afterward at 4 a.m.

“It was all based on their work schedule,” he said. “They didn’t mind coming by, even if it was late. They were already up, coming from the jobs. Now it’s different; there are no jobs to come from.”

By 1989, when the union hall closed down and moved to a smaller office-only space, Las Vegas’ musical tastes had changed. The big bands gave way to rock and cabaret singers and later, to a new generation of rappers and DJs.

The boys in the band were suddenly outside looking in. They became musical orphans, getting gigs were they could, often with no place to practice, other than a shifting landscape of old converted garages.

Then came Hemming and his Hall.

He spent $150,000 to erect an oblong space that could fit a dozen cars. Quickly, the place jumped with big band music as different players converged to jam in a soundproofed room with its own piano and drum set. They perused filing cabinets filled with thousands of jazz standards and relaxed on a few castoff couches in those brief moments away from the music.

Hemming, now 88, says the Hall attracted “guys like me, who’ve been musicians all their lives, guys just looking for a place to play.”

Among those who came was Roger Hall, whose mother was a ragtime piano player and whose father sang in a barbershop quartet. His idol was Charlie Parker and, like the Bird, he was rarely found without his alto saxophone in tow.

Even as he reached his late 80s, and had to have weekly shots in his eyes to cope with his macular degeneration, Hall showed up to play, often several nights a week. Sometimes, he’d carpool with veteran trombonist Patrick Thompson, who, even after he suffered a stroke and his doctor forbid him from playing this trombone, would come and sit in his old chair and just listen.

“You’d see him there in bliss,” said Jeannie Brei, whose seven-piece band, the Speakeasy Swingers, practices at the Hall.

Slowly, the old players died off — first Thompson and then Hall just last year. Both men had their memorial services at the Hall, that place where they’d spent so much time and made so much music.

“My wife used to tell me I never worked a day in my life,” said Hemming, who tips his head back in a long belly-laugh. “She said, ‘You played your music. It was all love.’”

Hemming himself was a regular for years, until Doris became ill and he would stay in the house and hold her hand as she watched her favorite TV shows.

After her death, Doris’ memorial was held at the Hall. The players wanted to erect a banner proclaiming the place “Hemming’s Hall,” in honor of Jim and Doris, but Jim wouldn’t hear of it.

The place was theirs, he said. Not his.

Hemming still plays his trombone an hour a day. But a recent stroke has left him unable to read music and so he wanders out to the Hall less frequently.

As the old players fade away, new ones take their space. High school and college musicians who have found the big band sound, as well as players in their prime.

When they need a place to play, they all call Hemming — even the rock and country players.

“I’ll take a look at the big calendar on the wall and if there’s nobody booked, I’ll say ‘Sure, you got it.’ As long as guys want to play, they’ll have a place as long as I’m alive.”

Elisa Fiorillo, a former backup singer for Prince who now croons in Harper’s band, says the Hall exudes a sense of the city’s musical history.

“It’s pretty cool,” she says. “You think of the years and years of talented cats who have played in that room. Prince would have loved the Hall. It’s old school, a place without pretensions, a gritty backroom of music.”

Gritty, to say the least.

“It’s not spic and span. It’s soulful,” Harper says with a laugh. “Especially the bathroom. That toilet has backed up more than a few times.”

Brei’s mother often stops by to vacuum and clean up the place and has found bags of cat litter behind the couches. “My mom has to stay on top of it,” Jeannie Brei says. “Mostly, it’s guys who go there. They don’t clean up after themselves.”

Nowadays, musicians chip in a few bucks to help Hemming pay the electricity bill and keep the refrigerator stocked with beer.

It’s a small gesture in honor of the man who keeps the music alive.

“Jim does this as a service to the players,” says Harper. “What he’s done, well, it changed my life. He’s given me a space to develop my band and my music.”

Dressed in slippers and pajama bottoms, Allen Imbach sits on one of the Hall’s old couches, under the low-hanging fluorescent lights, and listens intently as the big band tackles his jazz arrangements.

Imbach, who once orchestrated for the television shows “Bonanza” and “The Red Skelton Show,” now writes music for the Bruce Harper Big Band.

The musicians before him are an eclectic bunch. Among them are a schoolteacher who sidelines as a jazz trumpeter, a retired physician and trombone player who Imbach says was once forced to let a good friend die during a Vietnam battle because there was little he could do for him and other men needed saving; and a young saxophonist named Julian Tanaka, whose jazz quartet plays regular gigs at places such as the Dispensary Lounge.

They’re all consummate pros, Imbach says. “I can bring in a chart, throw it down, and they’ll play it the first time.”

On this Tuesday, Harper and his band have the Hall to themselves from 8 p.m. to 10 p.m. Harper sits at his drums behind the rest of the players. On a heating duct above, a stuffed crow peers down at the scene — a creative muse, a musician’s inside joke.

“I move it around to different places,” Harper says. “It inspires us.”

Tapping his sticks, Harper is the traffic cop for the music. The band starts off playing a piece by big band composer Sammy Nestico, best known for his arrangements for Count Basie and Frank Sinatra.

When the music stops, Harper doesn’t miss a beat.

“Eleven!” he commands and players shuffle their charts in unison.

The night moves on fluidly, with Harper calling out “376!” “330!” and then “344!” The numbers correspond to such jazz classics as “I Thought About You” by Frank Sinatra and “April in Paris” by Count Basie.

Shuffling their notes between songs, the players cackle.

“Yeah saxes!” one shouts at the finish of the song.

After another, somebody says, “Shut yo mouth!”

Imbach conducts a few of his arrangements, not looking a bit out of place in his pajamas.

The lights go out, the Hall left alone with its ghosts to host the music of players past.